This is the second in my series of posts from my family’s trip to Italy with the St. Mary’s of the Lake Choir from Skaneateles, NY. If you’d like to check out the first post, you can find it HERE.

Audience with Pope Francis: The Vatican 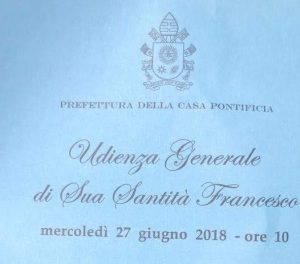 Day 2 of the trip found us a bit more rested in Rome but with a big day ahead of us. The day started with an audience with Pope Francis at the Vatican. We were there with many other pilgrims on a beautiful cloudless morning.

One of the things that struck me as different from my trip to the Vatican 40 years ago was the presence of chairs in St. Peter’s Square. I remember standing to see the Pope on my last trip and this was a welcome surprise.

The group of people in attendance included groups from all over the world with marching bands, other choirs and church groups.

As we waited for the Pope to arrive, we were shown a live video feed of him in another building within the Vatican meeting with athletes from the Special Olympics and other groups of disabled. He took the time to shake hands and visit with many of them personally. We were a bit confused into thinking this was a recording, but it was not. He got into his vehicle when he was done and was in St. Peter’s Square within minutes.

The excitement was quite palpable as his vehicle carried him around the square. His movement stopped every so often so he could reach out and bless babies that were brought to him. His charisma and magnetism were very evident.

One passage in particular was profound:

“Christian life is first and foremost a freely given response to a generous Father. Christians who follow only their “duties” complain of not having a personal experience with that God Who is “ours”. I must do this, this and this… Only duties. But something is missing! What is the foundation of this duty? The foundation of this duty is the love of God the Father, Who first gives, then commands. To place the law before the relationship does not help the path of faith. “

It was quite the experience. One of the sadder aspects of life in and around the Vatican are the many poor that seek out donations from the Christian pilgrims as the mill around. We saw people ranging from the physically disabled to a young mother with a baby attached to her breast walking around asking for handouts.

A danger in the area are the people that our guide referred to as “Gypsies”. These are generally well-dressed young women working in teams. You can spot them because they will often have one or more of their hands covered as they seek to distract and relieve tourists of valuables. We saw some individuals that fit this description and made sure to avoid walking near them.

The term “Gypsy” is a generic stereotype that is used disparagingly in Europe. Gypsies as a people are actually about 36 million in number around the world who make up the various communities that call themselves Roma, Sinti, Manouche, Kale, Gitan and Yeniche.

Pope Francis has actually encouraged his followers to stop their discrimination against them as he seeks to welcome them into the Catholic Church.

After a great lunch and some shopping in and around the Vatican, we returned to sing with the choir at a mass inside of St. Peter’s Basilica. We alternated singing with an all male Italian choir. They were excellent and reminiscent of the Three Tenors. We sang the hymns for the mass while they sang the mass parts in Latin and Italian. We jumped in where we could.

I relegated the taking of pictures to my daughter, Lillie. 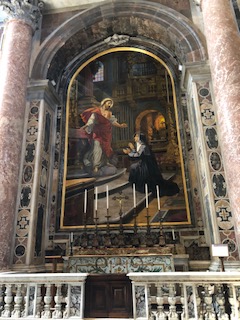 Dinner at the Kolbe Restaurant in Rome:

After the mass, which took everyone’s breath away from the awe of being in arguably the most famous church in the world, we went to dinner at the Kolbe restaurant in Rome. We had a great dining area outside and enjoyed the beautiful weather, some great food and wine.

We had live music and even had the opportunity to do some karaoke. With tables full of singers, everyone was scared to start it off so, after a couple of glasses of wine, I kicked it off with a couple of Sinatra standards: New York, New York and Fly Me To The Moon. Even though the musician/karaoke host didn’t speak English, the word ‘Sinatra’ was very familiar to him. Once I finished, some of the younger choir members started in with some opera and Broadway and movie show tunes. Eventually some hotel guests complained and we wrapped up the evening. 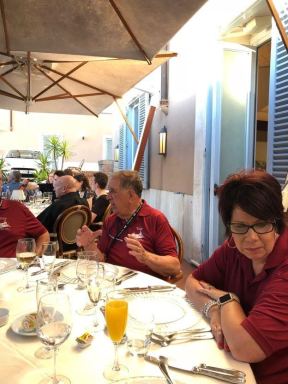 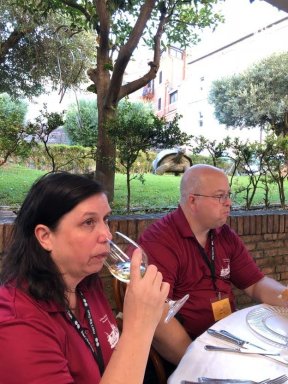 Overall, it was a great day in Rome and at the Vatican. 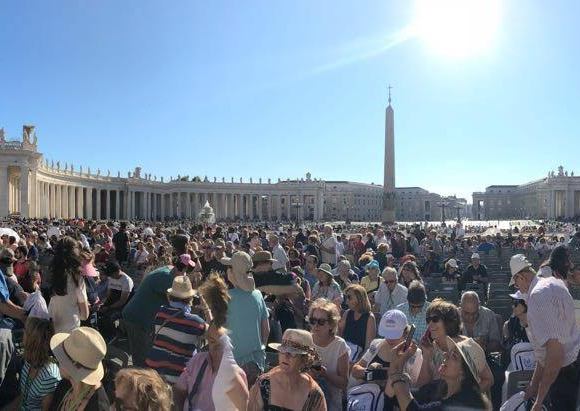