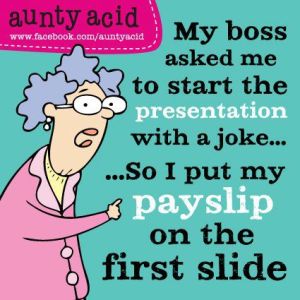 A: You do all the work and the fat guy in the suit gets all the credit.

Two factory workers are talking. The woman says, “I can make the boss give me the day off.” The man replies, “And how would you do that?” The woman says, “Just wait and see.” She then hangs upside down from the ceiling. The boss comes in and says, “What are you doing?” The woman replies, “I’m a light bulb.” The boss then says, “You’ve been working so much that you’ve gone crazy. I think you need to take the day off.” The man starts to follow her and the boss says, “Where are you going?” The man says, “I’m going home, too. I can’t work in the dark.” 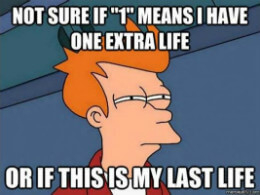 Q: What does Princess Peach sit on at a bar?
A: A toad stool

Q: How does Yoshi feel when he gets hurt?
A: Dino-sore

Q: What’s a toilet’s favorite game?
A: Call of Doodie

I was on a diet, but I doughnut care anymore.

Why did the doughnut go to the dentist? To get a filling.

A police officer jumps into his squad car and calls the station.

“I have an interesting case here,” he says. “A woman shot her husband for stepping on the floor she just mopped.”

“Have you arrested her?” asks the sergeant.

A woman noticed her husband standing on the bathroom scale, sucking in his stomach.

A therapist has a theory that couples who make love once a day are the happiest. So he tests it at a seminar by asking those assembled, “How many people here make love once a day?” Half the people raise their hands, each of them grinning widely. “Once a week?” A third of  the audience members raise their hands, their grins a bit less vibrant. “Once a month?” A few hands tepidly go up. Then he asks, “OK, how about once a year?”

One man in the back jumps up and down, jubilantly waving his hands. The therapist is shocked—this disproves his theory. “If you make love only once a year,” he asks, “why are you so happy?”