I’m happy to sit down with author Kayla Matt for today’s Perfect 10. Please enjoy getting to know her.

If you’re an author and you want to be a guest, I still have some spots open for this weekly interview spot. Just email me at don@donmassenzio.com

That one depends… It can get exhausting, but if I go too long without writing, it doesn’t feel right. It’s the same way with artwork.

I haven’t really written under a pseudonym. Though there are times that I’ll find myself thinking about it. The case for my doing it is that I really don’t feel that my actual name tends to bring much success. But if I use one, it’ll be for a series other than the one I’m writing now. I am already four books into this thing, and would rather not just throw that name change into the middle of it.

I’m not sure, on that one. On the one hand, a big ego may tie into self-promotion. The easier it is for a writer to promote themselves, the more likely they are to sell books. On the other hand, if someone has a huge ego but lacks any sort of talent, people just tend to get sick of them. So…I would say that it depends on the writer.

I actually did this before I started writing and publishing, but the best money I’ve ever spent connected to writing, period, would have to be when I bought a copy of Adobe CS5 after graduating college. Since I tend to swear by Illustrator when it comes to the comic pages and covers for my books, I would say that it was definitely worth it.

Writing success…I’d say that that would be when people read your stuff, give some kind of feedback… I haven’t hit a massive level of success as of yet, but I’m still working on it. There have been a handful of readers, but the general consensus has been positive. So I would say that it’s a start.

The research I do depends upon the book. I don’t usually research prior to starting one, as opposed to looking stuff up when I reach that point in the story. If it turns out that a plot point will not work, I will either try to find something instead that does work for what I need, or just run with it anyway if it feels right. Some of the things I’ve researched have been stuff like the taste of human flesh and images of burns. I feel it worth noting that some of the stuff I write is horror. The sources that I tend to use are whatever I can find online. As long as it has some credibility, of course. In other words, not Wikipedia.

I don’t have a particular method for selecting character names, to be honest. Sometimes, I will give one a first name inspired by a person in either real life or something I’m a fan of. The last name will come from whatever I feel sounds right with the first name. For example, the character of Travis was named for a guy I knew as a kid. A bit of thought later, and I found myself giving him the last name “Malone”. However, I also give everyone a middle name, and gave Travis the middle name of “Isaac”, just for the sake of making his initials “T.I.M.”. Sometimes, I will choose two random letters of the alphabet and have one be the start of the first name, the other start off the last name. There are two incredibly minor ones whose names I regret, though, and both are targets of my assassin characters: Matt French and Will Parks. Why do I regret those? Because I found out that there were real people with those names: one being a graphic artist, the other being a football player. I’ve decided that French’s full first name would be “Mathias” to offset that a bit. And Parks’ appearance is quite different from the real life one. Also, these two characters are INCREDIBLY minor, and there are times in real life where two people will have the same name.

Romantic, definitely. I have no issue with writing, say, torture scenes or anything like that. But romance just feels so forced for me.

Now this is a hard one. I am actually pretty bad at asking people questions. But if I could choose anyone? One might be Stephen King, as he is one of my favorite authors. There’s a good chance I’d ask him questions about his inspiration…or if he’d sign a few books. I might also go with Adam Warren, given that he’s both the writer and artist for a series of graphic novels. I’d likely ask him for help with marketing…and/or some autographs. Another would be Charlie Day, as that’s the voice I can hear most clearly for one of my characters, and I might start asking if he’d be willing to voice the guy if were ever to have an animated series (or movie) based on my series. Did I say “asking”? I meant “begging”. And a fourth one would likely be Walt Disney, because Disney movies were what got me interested in both writing and illustration. To be honest, though, I really can’t think of what I would ask him because there is a very good chance that I will forget what words are.

The most marketing success I’ve had has been a combination of Facebook and good old fashioned word-of-mouth. 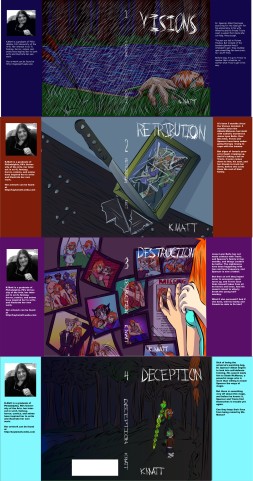 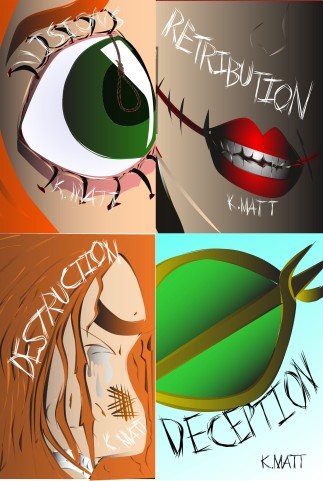 The Hell Bent series is 4 books in so far, with 1 completed arc and the 2nd arc underway. The series is a blend of horror, urban fantasy, sci-fi, and graphic novels.

Visions: Dr. Spencer Abbot has been searching for the ideal anniversary gift for his wife. When he and his friend Travis meet a woman that claims she can help, they accept.

The pair are led to Visions Studios. But instead of the boudoirs photos they’d intended to get, they stumble upon something far more sinister: snuff films.

Before long, it’s up to Travis to resolve their situation, no matter what tries to get in his way.

Retribution: It’s been 5 months since the Visions Incident. 5 months since the Abbots/Malones had dealt with sadistic murderess Jesse Lynn Belle. Over this time, Travis and Spencer have been undergoing therapy, trying to cope with the trauma.

But signs of Jesse’s presence begin cropping up. And it’s beginning to take a toll on Travis. It soon comes down to him, his aunt, and her friends to track her down, before it costs them the rest of their family.

Destruction: Jesse Lynn Belle has not made contact with Travis and Spencer’s family in four months, and things couldn’t be better. The nightmares have been happening with less and less frequency, and Spencer is now a father.

But then an evil they hoped never to encounter again turns up, and Travis soon finds himself taken from all he knows and loves. And it’s Jesse’s intent to utterly break the young half-monkey.

What if she succeeds? And if she does, will his family and friends be able to fix him?

Deception: Sick of being the universe’s punching bag, Dr. Spencer Abbot begins to look into self-defense training. His search leads him to Slade McManus, a powerful mage who is more than willing to teach Spencer the ways of magic.

But there is something very off about this mage, and before he knows it, Spencer and Travis find themselves in trouble yet again.

Can they keep their lives from being ruined by McManus?