Nonfiction Books Are Flying Off the Shelves Thanks in Part, It Seems, to the Trump Bump 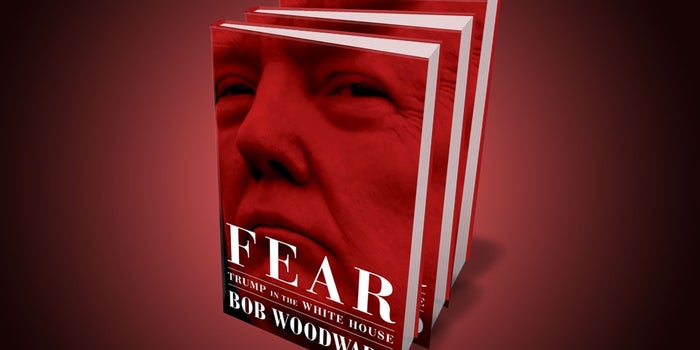 Watergate journalist Bob Woodward’s latest book, Fear: Trump in the White House, is already No. 12 on Amazon’s “Best Sellers of 2018 (So Far)” list. But it’s not even out yet. Its release date is Tuesday, Sept. 11, but pre-orders of the book have already propelled it to that spot.

The book that tops the list is Fire and Fury: Inside the Trump White House by Michael Wolff, while No 5. is A Higher Loyalty: Truth, Lies, and Leadership by James Comey. Across America (and the world), these titles have been in high demand with bookstores of all sizes and libraries as well.

We took a long, hard look at the season’s offerings from independent and university presses, and, after consulting with PW’s reviews editors and booksellers, came up with a list of 20 books that readers won’t want to miss. What if the pterodactyl had refused to go extinct? What if you moseyed down the 6000 block of Falls Road or the 1700 block of Aliceanna Street and found a brontosaurus sitting on the corner?

In a sense, when you walk into the Ivy Bookshop or Greedy Reads — or A Likely Story in Sykesville or Red Emma’s in the city, or too many other independent booksellers to mention — that’s exactly what you’re seeing.

For the last decade, pundits have decried the imminent death of the publishing industry and in particular, of brick-and-mortar book bins, which peaked in the 1990s at about 3,000 stores, according to the American Booksellers Association. The stratospheric rise of Amazon supposedly had placed the indies on life support, just as eBooks were thought to be killing off physical volumes. The statistics were grim — from 1995 to 2009, the number of independent bookstores in the nation fell by a staggering 43 percent. Later, the highly visible shuttering of behemoth Borders Books in 2011 lent credence to the gloomy prognosis.

Publisher Revenue for Consumer Books up 3.6% First Half of 2018

Publishers’ revenue for consumer (trade) books increased by $115.5 million (+3.6%) for the first six months of 2018 (Jan. – June) compared to the same period in 2017. The biggest revenue gains in the first half of the year in terms of dollars came from Adult Books, which were up $90.6 million (+4.2%). Five consecutive months of positive revenue for trade publishers helped to mitigate June’s -6.3% decline in revenue for trade books (fiction/non-fiction/religious).

Amazon has won US$75,000 (A$104,000) in an arbitration case against ebook marketer Thomas Glenn of the Dominican Republic, reports GeekWire.

The case was one of five arbitration demands that the company filed in 2017 in an effort to crack down on alleged abuse of its Kindle Direct Publishing (KDP) system.

9 thoughts on “This Week in Indie Publishing”