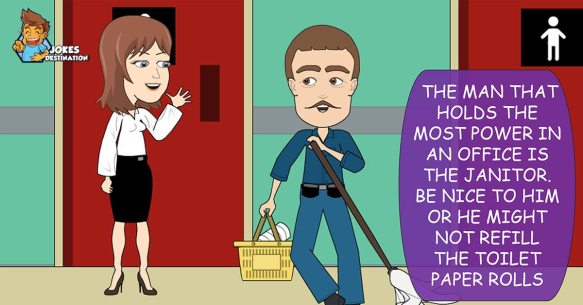 A janitor was staying with a friend and asked if there was anything he could do to help him.

His friend said “I’d really appreciate if you could get me a carton of milk when you’re out. If they have eggs, get six.”

Half an hour later, the janitor returned with six cartons of milk.

“Why did you buy six cartons of milk?,” asked the friend.

“They had eggs,” replied the janitor.

There is a guy who wants to be a janitor at a church. After they hired him the father said: “There are 3 things you cannot do, you can’t smoke, you can’t drink, and you can’t swear because they all set bad examples for the kids and we don’t want you destroying the house of God.” The janitor agrees.

The next day after work the father was driving home in his car and saw the janitor walking down the street. The janitor doesn’t see him. Then all the sudden the janitor starts feeling himself all over and then says as the father overhears him: “Ah Crap! Must’ve left my damn cigarettes at the bar!”

On the first day of a semester, Professor Artman, clad in his usual flannel shirt, work pants, and boots, was cleaning the blackboard. Two freshmen entered his classroom and took seats. After he finished and without saying a word, Artman proceeded to write out a series of equations for his upcoming class.

One student looked at the other and said, “Wow, this is a tough school! Look, even the janitor knows calculus.”

1. Lower corner of screen has the words “Etch-a-sketch” on it.2. It’s celebrity spokesman is that “Hey Vern!” guy.
3. In order to start it you need some jumper cables and a friend’s car.
4. It’s slogan is “Pentium: redefining mathematics”.
5. The “quick reference” manual is 120 pages long.
6. Whenever you turn it on, all the dogs in your neighborhood start howling.
7. The screen often displays the message, “Ain’t it break time yet?”
8. The manual contains only one sentence: “Good Luck!”
9. The only chip inside is a Dorito.
10. You’ve decided that your computer is an excellent addition to your fabulous paperweight collection.

What do you call having your grandma on speed dial?

My wife gave birth 4 times and still fits in her prom dress from high school. I gave birth 0 times and I don’t fit in my pants from March.

Every time someone calls me fat I get so depress I cut myself… a piece of cake.

You’re fat. It’s not because it runs in the family, you’re fat because nobody runs in your family.

As a pastor is wrapping up his service, he tells his congregation “Next week I will deliver a sermon on the evils of lying. To prepare for it, I would like you all to read Mark chapter 17.” The next week in service he asks how many parishioners read the 17th chapter of Mark. Every hand in the congregation goes up. “Mark has only 16 chapters,” the pastor continues with a grin. “I will now proceed with the sermon on lying.”

As AN ordained minister working in a denominational office, I am called upon to be a guest speaker across Canada. I must frequently remind myself to project my voice since not all public address systems compensate for an inadequate delivery. This was driven home one Sunday morning by an elderly woman with a hearing aid who shook my hand and said pointedly: “That was probably a very good sermon.”

WE WERE new in town and met our daughter’s teachers for the first time at the school’s open house. The science teacher, with a twinkle in her eye, asked me, “Are you a minister?” “Yes,” I replied. “Why do you ask?” “It was just a feeling I had after reading one of your daughter’s homework assignments,” she said, handing me the corrected paper. Next to the item “Define the Great Divide,” my daughter had written: “When Moses parted the Red Sea.

THE preacher and his friend had teed off. The friend missed a short putt for his birdie and swore under his breath. At the third hole, he missed another easy putt. “Damn! Missed again,” he muttered. On the seventh hole, he did it again. “Damn! Another miss!” he groaned. The preacher kept giving his friend reproachful glances but said nothing.  They started out on the back nine. On the tenth hole, the ball just missed the cup. “Damn! Missed again!”   “Look!” cried the preacher. “I’m tired of your swearing. If you do it again, I’m going to call on the Lord to strike you.”  Yeah, yeah, thought the friend as he teed off on the eleventh. The rest of his putts were accurate until the last hole, where a two-meter putt rolled up to the lip of the cup and stopped right there. “Damn, damn, damn! Missed again!”  A huge black cloud formed overhead and rolled around for a few seconds. Then a lightning bolt whizzed down from the sky and zapped the preacher. The friend gaped in amazement as the clouds opened up and disappeared. Then a sepulchral voice came from nowhere: “Damn! Missed again!”