Check out this excerpt from the book, The Bow of Destiny, by P.H. Solomon, as posted on the Archer’s Aim blog. 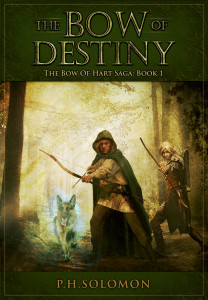 A silhouette kneels and rocks, dark against the fire beyond it. A woman’s uneven voice chants:

“The bow shall be hidden from heart…”

The swaying speaker feeds wood into the fire. Sparks snap from the coals and whirl amid the orange-blue tongues. An arc forms in the smoke and fades into the stars.

“The eagle will guide the heir…”

“The bow shall be found at need…”

Wrinkled hands tie a wad of cloth with string – a bowstring.

“And the arrow shall Eloch prepare.”

A shooting star streaks across the horizon and drags Athson’s attention from the crouching figure before the popping fire.

The figure half-turns and tosses the packet at Athson’s feet. He stares at it, then back to the kneeling woman. Her face half-lit by the firelight reveals a pointy nose that overshadows…