This post was inspired by the book, Nabokov’s Favorite Word Is Mauve, by Ben Blatt. This book applies numbers and statistics to some of the age-old adages about writing that we have all been told numerous times. Last week, I posted on the topic of adverb usage.

Exclamation points are the bane of some writers. In his book 10 Rules of Writing, Elmore Leonard states his rule of thumb on exclamation points. “You are allowed no more then two or three per 100,000 words of prose.”

So, just like with Stephen King and his adverb ratio, Blatt sets out to see if Leonard and other renowned writers subscribe to this rule. He starts by analyzing Leonard’s 45 novels which total 3.4 million words. His rule would have resulted in the use of 102 exclamation points in his writing over his career. His actual number was 1,651 which is 16 times what his rule states.

Still, when you look at his writing compared to other respected authors, he is at the top of non-usage of this pesky punctuation mark. Leonard came in at a rate of .05% per 100,000 words. The chart below, taken from Blatt’s book, illustrates where these authors fall in the exclamation point rankings. 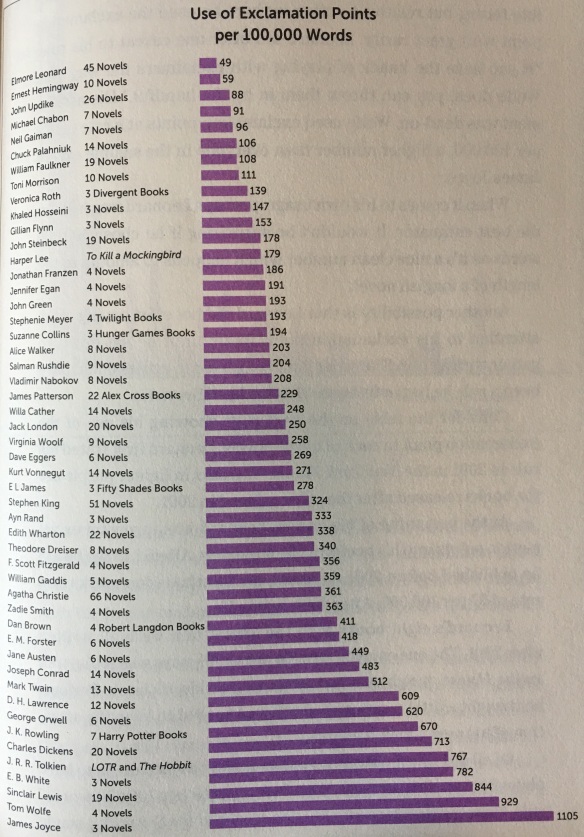 How about you? Do you use too many exclamation points? Do you agree with this guideline?

61 thoughts on “Don’t Use Exclamation Points in Your Writing!!!”