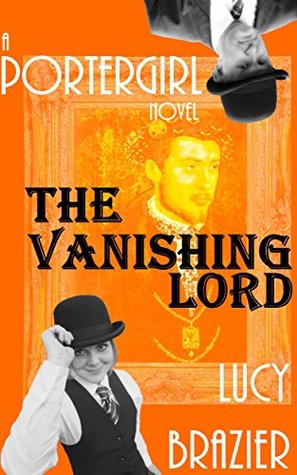 There’s nothing quite so annoying as having the police arrive when you are trying to cover up a crime that may or may not have happened.

Lord Bernard has died unexpectedly. Is Deputy Head Porter being framed? Head Porter just wants to be kept out of the picture.

In this fast-paced whimsical British romp, a priceless work of art – the portrait of Old College founding father Lord Arthur Layton – has gone missing and with the death of Lord Bernard, the Master of arch rivals Hawkins College, there is nothing for it but for our heroine to don her trusty bowler hat and embark upon another eccentric investigation.

In this sequel to the debut PorterGirl novel, First Lady of The Keys, Old College’s first and only female Porter must find the portrait or it will be her that is flat on the canvas and framed like a kipper.

The Vanishing Lord was a fitting second installment in the saga of the Deputy Head Porter. This book revisits wonderful characters from the first book while introducing some interesting newcomers.

It’s summer at Old College, but that doesn’t mean that there is a lull in the action. This book has the Deputy Head Porter and her squad investigating another crime at the college. This time, however, they are also fighting against an intrusive police department that seems to want to get involved with investigating crimes for some reason.

Add to this a clandestine venture to a rival college, the addition of a goofy law scholar with a big mouth, and a mysterious new Bursar and the Old College family has grown in comic proportions.

I look forward to further adventures with this crew.

You can find out more about this book and the previous one on Lucy Brazier’s blog HERE.