Check out the book, Frost at Midnight, by James Henry, from the Cleopatra Loves Books blog 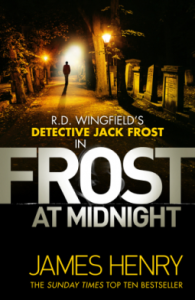 For those who loved R.D. Wingfield’s original crime series featuringDIFrost, James Henry has recreated this dishevelled detective in earlier times; Frost at Midnight is the fourth prequel in the series.

It’s 1983 and Denton CID are confronted with a dead body on top of a tomb in the local graveyard, the case is instantly a PR nightmare as the body is Rachel Curtis, a domestic violence victim who acting under coercion was jailed for murder but had now been released early. Added to the now increased workload there are more immediate problems as Detective Sergeant Waters is getting married and he’s unable to attend the rehearsal with his best man Detective Inspector Jack Frost.