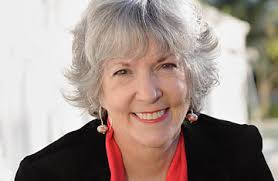 Sue Taylor Grafton is a prolific author of detective novels. She is best known as the author of the ‘alphabet series’ featuring private investigator Kinsey Millhone in the fictional city of Santa Teresa, California. The daughter of detective novelist C. W. Grafton, she has said the strongest influence on her crime novels is author Ross Macdonald. Prior to success with this series, she wrote screenplays for television movies.

Grafton began writing when she was 18 and finished her first novel four years later. She continued writing and completed six more manuscripts. Two of these seven novels were published. Unable to find success with her novels, Grafton turned to screenplays. Grafton worked for the next 15 years writing screenplays for television movies, including Sex and the Single Parent, Mark, I Love You, and Nurse. Her screenplay for Walking Through the Fire earned a Christopher Award in 1979. In collaboration with her husband, Steven Humphrey, she also adapted the Agatha Christie novels A Caribbean Mystery and Sparkling Cyanide for television and co-wrote A Killer in the Family and Love on the Run. She is also credited with the story upon which the screenplay for the made for TV movie Svengali (1983) was based.

Her experience as a screenwriter taught her the basics of structuring a story, writing dialogue, and creating action sequences. Grafton then felt ready to return to writing fiction. While going through a “bitter divorce and custody battle that lasted six long years,” Grafton imagined ways to kill or maim her ex-husband. Her fantasies were so vivid that she decided to write them down.

She had long been fascinated by mysteries that had related titles, including those by John D. MacDonald, whose titles referenced colors, and Harry Kemelman, who used days of the week. While reading Edward Gorey’s The Gashlycrumb Tinies, an alphabetical picture book of children who die by various means, she had the idea to write a series of novels based on the alphabet. She immediately sat down and made a list of all of the crime-related words that she knew. 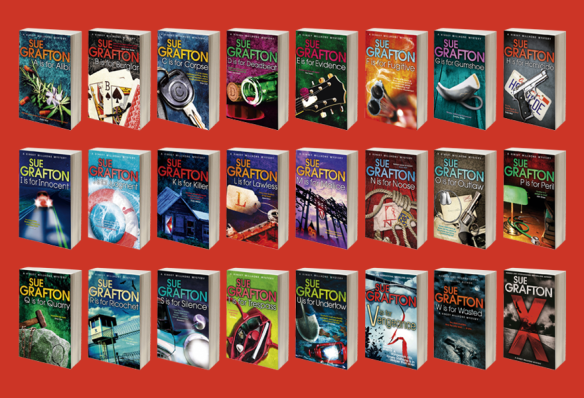 This exercise led to her best-known works, a chronological series of mystery novels. Known as “the alphabet novels,” the stories are set in and around the fictional town of Santa Teresa, California. It is based on Santa Barbara, outside of which Grafton maintains a home in the suburb of Montecito. (Grafton chose to use the name Santa Teresa as a tribute to the author Ross Macdonald, who had used it as a fictional name for Santa Barbara in his own novels.)

In the series, Grafton writes from the perspective of a female private investigator named Kinsey Millhone, who lives in Santa Teresa. In apparent tribute to Macdonald, Millhone refers to her private investigator license as a “photostat,” as did Macdonald’s character Archer. Grafton’s first book of this series is “A” Is for Alibi, written and set in 1982. The series continues with “B” Is for Burglar, “C” Is for Corpse, and so on through the alphabet, with the exception of the 24th novel, simply titled “X”. After the publication of “G” Is for Gumshoe, Grafton was able to quit her screenwriting job and focus on her novels.

The timeline of the series is slower than real time. “Q” Is for Quarry, for example, is set in 1987, even though it was written in 2002. Grafton has publicly stated that the final novel in the series will be titled “Z” Is for Zero.

Grafton’s novels have been published in 28 countries and in 26 languages, including Bulgarian and Indonesian. She has refused to sell the film and television rights to her books, as her time writing screenplays had “cured” her of the desire to work with Hollywood. Grafton has also threatened to haunt her children if they sell the film rights after she is dead.

7 thoughts on “Studying the Masters of Detective Fiction – Sue Grafton”