This blog post is a little bit different. I have been posting tips that focus on mechanical aspects of writing and on other aspects of the independent publishing industry. With this post, I wanted to let you in on one of the more abstract aspects of the tools that I use for my writing.

I have always been more of a visual person than someone who learns from the written word. Strange for a writer, but it makes sense to me. When I write, I see the worlds for my characters in my mind. I also see and hear my characters as I write dialog for them. Now, before you think I’m crazy, it’s a technique that works for me and there are times when paragraphs and even chapters appear that I have written on some kind of autopilot. Of course, there are other times when the words are more forced because I want to get a certain amount done. Those sections are never as good and are frequently reworked.

I want to introduce you to the concept of the mind map and the character map. These are tools that I rely upon heavily.

Here is a quick overview, but I might cover them with more depth in future posts.

A mind map is a technique where you have a central idea (such as a book) and have several ideas connected to it (chapters). Once you have these connected ideas in place, you can start to refine them and move them around to establish their order. Here is a mind map that I did for my book, Let Me Be Frank – Frank Rozzani Detective Series Book 2: 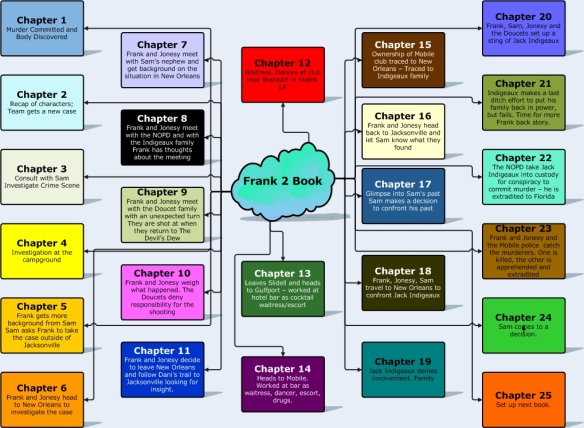 As you can see, when I established the book, I didn’t have a title yet, but the chapters ended up staying fairly true to the final book. Of course, like with any of these techniques, you can deviate at any time if it makes sense to do so based on where your characters are headed or how they develop.

I also introduced the concept of the character map. This graphical representation of the relationship among the main characters helps to establish who is related to whom and how they interact. It is very similar to a family tree.  An example, also from Let Me Be Frank, is shown below:

This image shows the relationships within the Indigeaux family. The character with a red “X” is a murder victim. It also shows the Doucet and Monreaux families and how some of the key characters are related. This is useful when I sometimes forget names or relationships when the dialog or narrative is flying into the story.

Now that I’ve recapped these two techniques, I want to introduce a new one that I’ve just started using. It is the “Word Cloud” technique. Word clouds are becoming very popular as a way to show survey and poll results. You’ve probably seen them on TV or on the Internet. 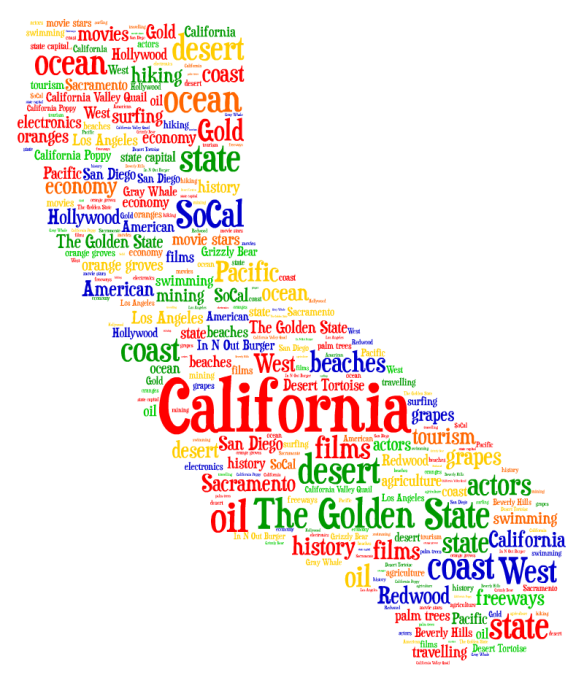 In a word cloud, the largest word in terms of font size is the one that was mentioned most frequently. Tagul actually gives you a count of how many times each word was mentioned. Not surprisingly, the number one word in this word cloud was California. You can see by quick review what the most popular words were in the survey. This particular word cloud has a couple of nice features. First, it is shaped like the state of California. Tagul and other services let you pick the shape of your cloud. Also, the color of the words helps some of the words stand out and can be tied to a legend.

So, you might be wondering, what does this tool, mostly used for surveys, have to do with writing. I asked myself the same question and then I thought I would try some experimentation. I started with a short story.

One of my short stories, Play it again Des, is about a man named Desmond Brown who runs away to New Orleans as a young piano player looking to make the big time. He has some talent, but is not content to pay his dues and put in the time to build up his talent. He meets a strange man, and talented trumpet player, named Lou who offers him what he wants instantly, but with a price.

I took the entire story and used the cut and paste option in Tagul to see what the results would be. I customized the colors a bit and removed words like “the”, “a”, “and”, etc. The results are shown below: 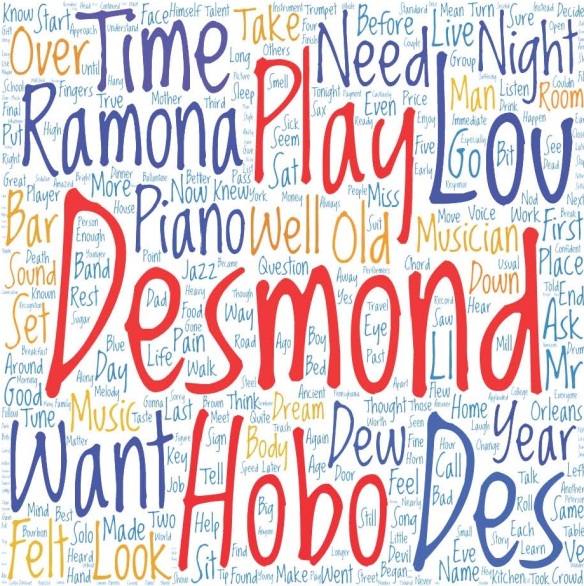 As you can see, the word cloud almost tells the story in the synopsis. The words in red are the ones that were repeated over 50 times. Desmond and Hobo are two of the main characters in the story. They both “play” the piano. Words in dark blue were mentioned between 30 and 49 times. Piano jumps out. Lou, the man who gives Desmond his instant dream, emerges. It’s interesting that the word “Want” pops out as well. This story is all about “Wants”, but the word “Need” is there also. What was interesting to me is that I saw my story emerge from this graphic.

Another useful purpose of this took is to identify words that you over-use during your writing. If words like “literally” or “exactly” pop up more than a few times in each chapter, you might have a problem with repetitiveness.

I decided to see if this technique works on chapters of longer works. You remember my Mind Map that I mentioned earlier? I wanted to see how the mind map boxes matched up with the chapters. Here is an example from Let Me Be Frank.

This word cloud is from Chapter 2 where Frank Rozzani, the main character, finds out about the case from a police detective, Anita, and enlists the help of his friend Jonesy. You can see that the words “Frank”, “Case”, “Anita” and “Jonesy” are pretty prominent. Also, a popular character from the book, Frank’s dog Lucy, is strongly represented. Again, for a visual person like myself, this word cloud tells me a story and also tells me that my chapter is emphasizing the words that I want to convey in this section of the book.

I encourage you to try this with your work. The help will be twofold. It will help you eliminate words that might be redundant in your writing. It will also help you to see of your story is conveying the right message in a visual sense.

As always, I welcome your opinions and comments.

7 thoughts on “A Different Way to Visualize Your Writing”