Check out the new book on the shelves of Sally’s Cafe and Bookstore, Naked Alliances by S.K. Nicholls.

A riveting romp through Central Florida, Naked Alliances air-drops you into the seedier side of Orlando that the amusement park industry tries to keep under wraps. Naked Alliances: A Richard Noggin Novel (The Naked Eye Private Investigator Series Book 1) by S.K. Nicholls 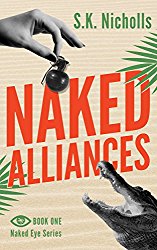 When a young immigrant woman and an exotic dancer are fleeing men with guns and have no place to hide, Richard Noggin, P.I., can’t turn his back on them, even if helping them makes him a target.

Richard plans to impress an aspiring politician by taking on a big white-collar case with the potential of getting him off the streets and into air-conditioned offices. Instead, he’s handed a cold case and quickly finds himself sucked into a shadowy world of sex, secrets and…murder.

Marked for a bullet and stretched thin by his investigations, he reluctantly teams up with the unlikely, brassy custodian of the…