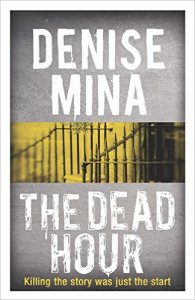 I really enjoyed the first book in the Paddy Mehan trilogy: The Field of Blood and the slightly overweight, under confident trainee journalist in the sexist environment of the news room in 1980s Glasgow really got under my skin. Denise Mina has come up with an incredibly appealing combination of a thriller mixed with a hint of nostalgia at a particular time in history when everything was changing.

The Dead Hour is set about three years later and Paddy riding in the ‘night call car’, the one that follows the police radio around the city looking for newsworthy stories when they are called to one of the better areas in Glasgow. It seems to be a case of domestic violence, one that the attending police officers aren’t too interested in and despite being disturbed by the woman’s appearance there isn’t a great deal to call in about…